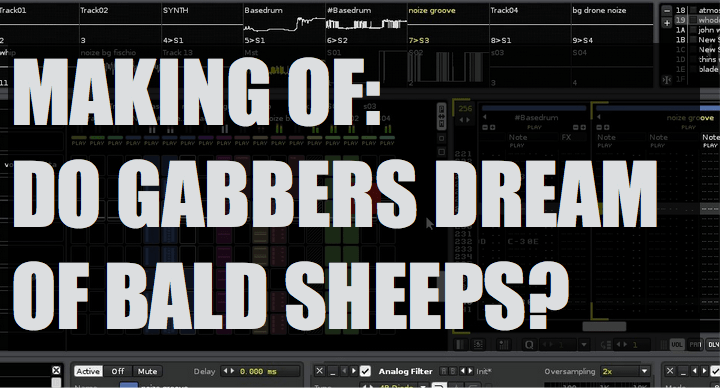 Home » Blog » Making of » The making of Rotello – Do gabbers dreams of bald sheeps?

Since I always loved when producers tell the “making of” a track, I decided to do the same in my little and total ineptitute in music making.

Listen to Latest version so far

Here it s the latest version

between version 0.3 and version 0.4 . i did not listen to the track for some days so i was able to find more error. I was able to track many glitches here they are:

version 0.5 has been a huge, ongoing work: deleting, adding, moving. i corrected a lot of issues of V04… i m still looking for some good vocals, but i think the track is now more Energetic . Largest change are:

The History of the Track

Let’s start with the idea.

Lucio Battisti has been one of the top Italian singer of the 70’s. Not only he sold a LOT of record but he was kinda sperimental, too. I love “La canzone della terra” and how its main theme is the groove: Bongos, fencing sound and whip… Listen to it here:

I am not able (nor it s useful) to replicate verbatim the drum pattern of the above song, but i loved the idea.  I searched on google “bongo wav”, “sword”, fencing, whip and so on and found a nice series of samplez, played with them and a good enoigh groove came out.

The odd numeration is the results of my experimentation with the base. at the end it came out a 288 bpm track, Skull blower style. Basedrum pattern are kinda easy in the first version of the track i ll need to make them better to be congruent with the Build up

At the beginning v 01, v02 I used a sample of MMA fighter Conor McGregor and me speaking ( I met him and have a chat during a UFC in UK before he was a super star). I then decided that it was too light and fun for a Darkcore track, So i Took it away.

in Mid December the Trailer of Blade Runner 2047 came out, i loved a couple of noize there (see step 6: noize & Bg) and also found a “ok” vocal, which i could use also in the final version.

I had a GREAT sample to start the second part of the track, but again it was not congruent with the general track so i took away ( i ll use it in another track for sure, it s THAT good)

With Version 03 – I added some Blade runner samplez, but i dont like how they are now… i ll need to scout for others…

I didn’t want to follow the usual way of doing track (base, pause, drop) so the track is a bit random 🙂

basically the Bridge / pause is still with the base but it s half speed, and in my plan should build up to second part.

I really miss the huge build up and release the track of the 90’s had. Nowadays it all about the drop, which… drops instead of peaking 😐

Not easy to build a decent build up in such a noizy track, but i want to do at least one

I am kinda happy with that. v01 was already good, in v 02 the whole whip & industrial sound were very well melt togheter.

in V03 I added more intro and ending noizes, and  made the second part a bit different from usual, instead of adding stuff to the base, i took it away to have a cleaner baser. I ll have to find a way not to lose too much energy, but it s doable

7shares
We use cookies to ensure that we give you the best experience on our website. If you continue to use this site we will assume that you are happy with it.OkNoRead more